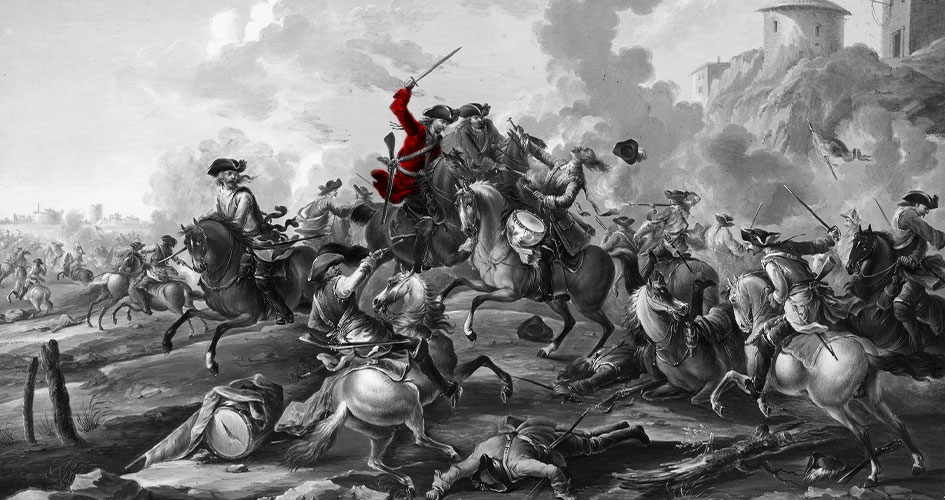 O what a great time is this century of iron!
– Voltaire, Le Mondain

NOTE: This article was first published in French, my native language. Let me beg your indulgence for every time you’ll see me stumble in this shaky English prose.

Well this is it, it’s settled in my mind, I’m going for it: I want to start playing Dungeons & Dragons again! Sure, I could join an existing group as a player, but I feel a burning desire to create something more extensive than a single character. I want to create my own campaign. Not only do I want to take up the challenge of stepping into the role of Dungeon Master, I also want to create my own setting. Fortunately I have an idea that’s been haunting me for the past few years: to take my players to the Age of Enlightenment. This is the Century of Iron.

I’ll admit: this is an ambitious project. If I had a shred of intelligence, I would start small. I’d find an easy-going group and shake the rust off with a few adventures before trying a stunt like this. But if there’s one thing I’m not it’s reasonable so let’s see where I can take this. I’m challenging myself here and I’m inviting you to this show, whether it ends well or not. Whatever happens, the following acts should be interesting!

Let’s start with the basics: what makes an interesting setting? In my opinion it’s its specificity, what it does that no other setting does with as much complexity and/or intensity. The official settings that felt the most captivating to me in the last twenty years or so were those that showed the most originality:

(Conversely I never really liked the Forgotten Realms. It always seemed to me like a big amorphous potluck, without any purpose or direction. Come to think of it, it might be what made it so popular: being so generic, it’s also most malleable.)

The main differentiator for Century of Iron is the historical advance it has over most of the typical fantasy worlds set in an approximate medieval Europe. By « historical advance » I don’t mean only technological progress, even though there are a lot of examples. Firearms, optics, clockworks, Vauban fortifications, the ubiquity of printed materials, the first steps of modern medicine – all of these and more will have an obvious impact on the game mechanics ad the stories we get to tell.

This historical advance is also  – and mostly – manifest in the minds of the time. Starting a few centuries ago, the forgotten sciences of the Ancients have started to come back to light. Since this leap back is perceived as a return to the true sources of knowledge, it’s called a « renaissance ». Paradoxically, these ideas from the past suggest a more luminous future. Men and women of genius start questioning the preconceived ideas around them. They start addressing problems – social or technological – in a novel way, turning away from outworn conventions. For these Rationals, no challenge is too great for he who applies the full force of his Reason.

(In our own very real History, we called this revolution the Enlightenment.)

But, under the stern gaze of Reason, some worry of sacrificing too much on the altar of insensitive intellectualism. What remains of a man when the soul stays silent and only the head governs? When an era gets thrust under such a harsh light, it is bound to cast some harsh shadows. It would be imprudent to ignore the power hiding in this darkness, as it would be folly to neglect the strength that Passion is capable of. When you must face the firing line for your friends, when you need to unveil your very soul before ancient powers, when you have to choose to do what is good rather than what is profitable, the Passionals are who you’ll find on the forefront.

(And in our very ordinary world, we called this resistance the Romantic movement.)

But a setting is nothing more than a stage in a theater whose wings are filled with backdrops, costumes and props. It calls out for plays. The theatrical season we set up is the campaign.

A good campaign needs a central conflict. It will serve both as a theme and a narrative thread for all the adventures we’ll want to put our players through. Since Century of Iron is modeled after some already conflicting movements of history, it gives us a ready-made opposition that can easily serve for dramatic plotting.

Indeed the budding dynamic between the Enlightenment and Romanticism at the end of the 18th century can be boiled down to a very simple conflict: Reason versus Passion.

What’s interesting in this type of conflict is that it’s complex enough to steer away from the « good versus evil » conflict. Reason and Passion can both lead to the best as well as the worst outcomes. The former allowed Science to progress by leaps and bounds while the latter elevated Art to the highest peaks of creativity. However, one like the other have opened the way to unnameable horrors when pushed to their extremes.

This conflict is subtle enough to step back from clear-cut dichotomies and provide matter for richer stories than a simple fight between good and evil. All characters – be they controlled by the Dungeon Master or players – should find their place along the spectrum between the poles of Reason and Passion, without however remaining perfectly still.

Moreover the central conflict that we’ve chosen can be split into many sub-conflicts on which to base adventures. Let’s consider the following examples:

Pondering this shows how the Century of Iron setting can be a fertile ground for narrative developments that can engage players interested in a certain type of roleplay – one founded on complex characters and nuanced dramatic situations.

At least that’s the plan!

It’s important to make of Century of Iron more than « Dungeon & Dragons with tricorn hats and muskets ». To make sure that the differentiation is more than cosmetic, we need a special « mood board » featuring the following:

Conversely, the setting also needs to have its darker side. We can then surmise that the above bullet points should be contrasted with:

Thus in the Century of Iron a +2 sword is not a simple piece of loot taken from a generic dungeon; it’s the weapon that the maréchal inherited from his great great grandfather and which he takes to court even though the enormous flamberge draws oblique stares from the foppish courtiers.

Furthermore, the following can serve as inspirations:

The most perilous trap to look out for is to try and create too much too fast. Hence I want to follow the most frequent piece of advice I’ve seen so far: I won’t do more than what is necessary to give my players a good time.

The next step will be to write an introduction adventure for Century of Iron, preferably one featuring many of the elements brought forth in the Aesthetics and mood section. Thus this adventure should constitute a pretty good proof of concept for the setting as well as a swell initiation to roleplaying in a more modern fantasy universe.

However, as a way of limiting how much effort this will take – and perhaps also because I’m eager to go from design to practice – I’ll create pregenerated characters for the first group of players. This strategy will allow me to offer some select novelties to whoever is curious about the setting without having to re-do all of the classes in the Player’s Handbook.

Well, I hope you won’t hold it against me if I let you go so abruptly but I just realized all of the work I have to do. The next time we speak about Century of Iron, I’ll present the outline for the introduction adventure and – maybe! – you’ll get to see some pregen characters!